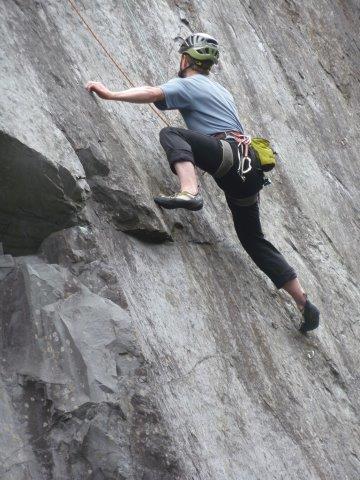 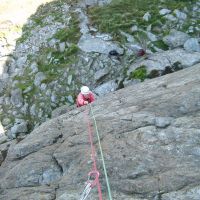 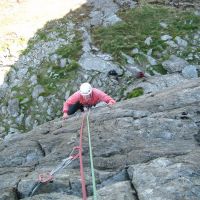 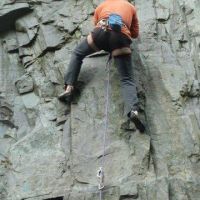 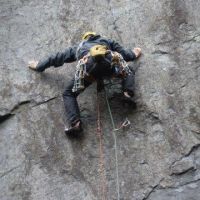 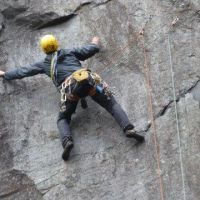 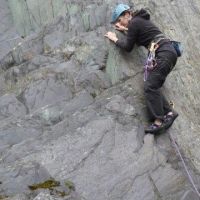 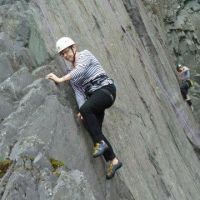 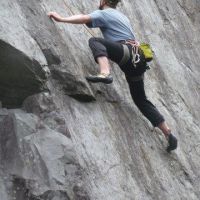 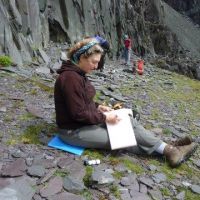 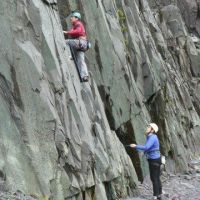 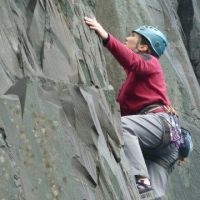 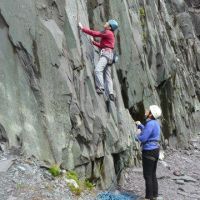 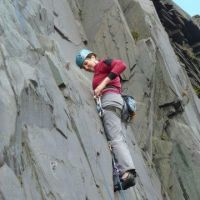 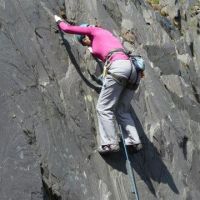 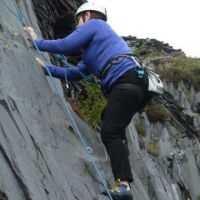 As a Bank Holiday weekend amongst some of Scotland’s finest mountains didn’t seem to be attracting much enthusiasm, and with a poor forecast, I made a late decision to relocate this one to Ty Powdwr on the edge of Wale’s finest mountains and where enthusiasm was modestly more apparent.

Mary, Meirion and I arrived late Friday, just after Gareth and Lucie, having enjoyed the delights of the excellent ‘Clipped In’ exhibition in Frodsham and enduring the tedium of a diversion through Conwy.

Saturday started bright but soon clouded over and it was raining by about 10.00am. Undeterred, however, we headed round to Ogwen and the Milestone Buttress. After some debate whether it really was just an “easy 200yd walk from the road” or “an interminable slog over evil boulder’s” Mary and I enjoyed a pleasant ascent of Rowan Route (Diff) in light rain. Meanwhile over to our left Meirion, Lucie and Gareth enjoyed variations on a theme of Ordinary Route (Diff). The rain came on in earnest during the mass abseil descent that preceded the short walk/interminable slog over scree and evil boulders back to the car.

All seemed to agree it had been fun and later we enjoyed a shared supper that evening when we were delighted to be joined by Alan (Liv ) Jones on his first visit to the hut for some time.

Sunday brought another bright start before clouding over a bit, but staying dry but for a couple of showers between routes in the afternoon.

The quarries and Never Never Land specifically was the destination for all. After Meirion and I had both led Zeus (F6a+) Gareth made a determined effort on Khubla Khan succeeding with one fall and employing a skyhook runner. Meirion followed in style whilst Lucy led 362 (F5b) in turn followed by Mary; all these antics photographed by Alan. The ladies then departed for Llanberis and Alan for a walk in the country park and those of us that remained waited out a shower before each leading Dog and Bone (F6a).

Next stop the Ritter Sport level down in the Vivian Quarry for Gareth to do a good lead off Ritter Sport (E3 5c) after waiting out the second shower. Mary and Lucie passed by at this stage, with Mary complaining about having to carry two bottles of wine and food up to the hut. However, my offer to take the wine was declined – presumably on the grounds it might not make it to the hut if left with me!

Monday is very wet early morning but dry by 9.00am. Craig and Sue arrive for breakfast and everyone heads into the quarries again. It’s a bit breezy and cloudy to start but brightening through the day to a beautiful late afternoon.

On the Skyline level of Austrailia Meirion leads Clah of the Titans (F6a) followed by Gareth while I lead the parallel line Plastic Solidier (F6a). Then higher up on the Alice Springs level Gareth does a great lead of Men of Leisure (E4 6a) with Meirion, again with a skyhook runner, whilst myself and Craig do the more modest Celtic Blood (F6a).

Lower down the levels at The Sidings level Lucie and Mary have done Gordon (F4) and later do Steps to Glory (F4) on the level below before Mary goes for a belaying master class with Meirion. Craig also leads Steps to Glory along with The Deceptive Dyke (F5+), Sad Man Who’s sane (VS 4c) and U.B.L. (VS 4b) before I round off the day with Looning the Tube (HVS 5B).

Meanwhile Sue has enjoyed a day of much sketching, painting and scavenging interesting artefacts whilst Alan has once more joined us to photograph the activity. A fine weekend finishes with food in the Vaynol Arms in Pentir and a clear run home after the worst of the Bank Holiday traffic.

As ever, thanks to those who came and made it an enjoyable weekend.