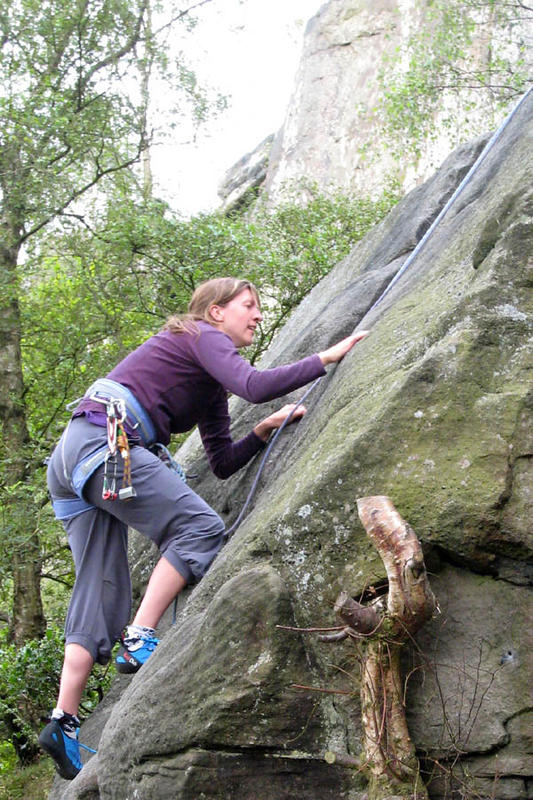 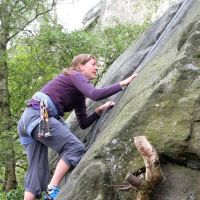 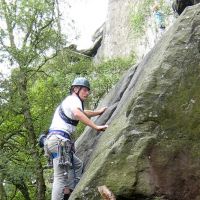 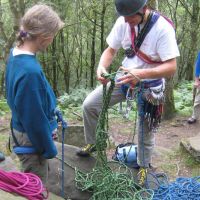 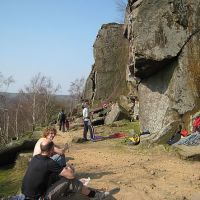 A select gathering of old hands and very welcome new-comers! Especially good to see Jim & Judith Symon. Jim, despite having not climbed for years, led Sheena up the strenuous Diamond Crack (HS) in fine style then followed Mark Ashley up Green Gut and Judith enjoyed a little cross-country travel in her wheelchair.

The weather was kind to us: warm without being sticky, and little wind. No sun, but no showers either despite the forecast.

Dave Shotton did sterling work taking half the party up Green Gut – then Dave Wylie took most of the rest of the party up it. Dave Shotton also led Dave Garland up Sunset Crack later on, and had a think about Tody's Wall… but decided to save this treat for the next Froggatt meet.

Midge and Roger fitted in a swift ascent of Sunset Crack early on (Midge: “This route hasn't got any easier…”). Roger then led Solomon's Crack (VD). He's been around long enough - should have known better. It's somewhat “traditional”! Laura, Michelle (who could just about remember how to put her harness on), Midge, Sheena, and Ding followed. Laura has added ”thrutching” to her vocabulary. Ding was the only one to climb it neatly and smoothly – the rest of us struggled.

Midge and Michelle did some crafty recruiting for their imminent Wild Wales Swimming Meet, and lunch was taken by the boulders up top before Jim, Sandy and Midge went off for a walk over the edges.

Sheena did sterling work at the top of Heather Wall (HVD) (you really should have put in more than two runners Sheena!), taking up most of the younger members of the party. Then, after a happy ten minutes disentangling his brand-new “Super-Tangle” rope (see right!), Mark Garrod took Michelle up the same route – his first lead for some time. Welcome back to climbing Mark!

Dave Garland showed that he had not lost his skills, leading Gamma (VD) early on and, when Trapeze (also VD) at last came free, led a keen team up that as well.

Dave Wylie rounded off the day's climbing for us all with a very smooth lead of the bold classic Severe, Allen's Slab.

A good day out!