A slate grey sky and a biting east wind failed to prevent the KMC emerging on mass for a gentle stroll over Taxal Edge and along Fernilee reservoir to the dam which we reached in time for elevenses and a guest appearance from Uncle Ken. The discipline of the ladies was commendable as they formed an orderly queue to hug Ken rather than mobbing him. Finally having dragged Lorna out of Ken's clutches we set off up the hill to White Hall where a small and not very select breakaway group headed directly to the pub in Coombes. The main group then gossiped there way along the edge of Coombes Moss as far as the shooting cabin from which we descended to the warmth of the boozer for lunch. The post liquid refreshment stage of the walk saw the pace of legs slackening but the speed of jaw increasing as the natterathon continued all the way back to Len's.

As per usual Ethel Hallam, Pat Holt and Len had surpassed themselves with the fantastic catering which was enjoyed by everyone, being just what the doctor ordered after such a bracing day out on the hill. Thanks to everyone who turned up and walked or helped with the catering. You all contributed to a most enjoyable meet.

Traditional meet which starts at Len's at 9.30am. Please park carefully. A walk of around 10 - 12 miles returning back to Len's late afternoon for a snack and a cup of tea. Non-walkers are most welcome. 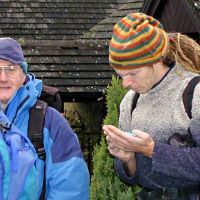 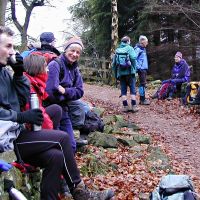 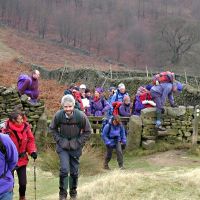