(The Lakes were officially FULL this weekend. Ed).

Five arrived on Friday evening to enjoy beautiful sunset over several glasses/bottles of wine and hatch a vague plan for the following day. A 9.15am start, early by KMC standards, saw Wavey, Trish, Lester, Jamie and myself weave our way up to White Ghyll, on what was promising to be a baking hot day.

Climbing as a pair and as a three, variations on Route 1 and 2 on the Slabs were completed. Wavey and Trish finishing before us; headed off to consider a potential V.Diff on Blea Crag. Closer inspection proved the route to be more grass and heather than rock so a decision was made to make directly for some quality routes on Pavey Ark

The situation was impressive; with the Ark looming over Stickle Tarn, excellent views were offered over the valley and of the swimmers in the waters below. Jamie and myself, completed Crescent Slabs; whilst, Wavey and Trish revelled with the delights of clambering over rotting sheep in Great Gully. (Ed. Suicidal sheep round here - spent some time admiring the sack of fleece hanging over a rock spike in East gully).

Both parties descending Jacks Rake and back down to the Stickle Tarn Tavern for lemonade and biscuits. Joe and John Dobson, were already downing a beer having completed Route 1 on Upper Scout Crag several VS's on White Ghyll.

Saturday evening; back to the hut for more wine; planning and to meet with Midge and John Castick.

Sunday: This was hotter still!

Midge and John opted for a walk and scramble over the Pike of Stickle. Whilst the Famous 5 went up to do several routes on lower Scout Crag and Routes 1 and 2 on Upper Scout Crag. Joe and John Dodson returned to White Ghyll to complete some more hard VS's.

Overall an excellent weekend, thanks to all who turned up.

(Tony Major & Dave Bone drove up to arrive at Gimmer shortly before 10am, expecting to see some KMC presence - but another w/e went by without a sighting! Received a good grilling whilst doing Crow's Nest Direct, Kipling Grove & The Crack (long delays). Fairly quiet, K.G had long periods without a party on it and retreated to the ODG. Every campsite in the Lakes was full, so stopped at the Walna scar road start above Coniston where there was a small village of tents. Sunday was spent trying to find non-overgrown routes on Pavey, finishing in the cool East face shade on Cascade (a mean, and runout HVS). Amusement was watching swimmers heading unsuspecting out to the island in the tarn. We had a peregrine's eye view of the pair of gulls circling the tarn - when the swimmers stood on the island they struck! "This is not your Island, this is Our Island!" Low altitude passes and dive bombs would continue until all humans were 5m clear of the islet. Highlight was an acrobatics display from the Pavey Peregrines (3) on topping out, held at eye level, and close quarters. The adults seem to have decided it was time for the juvenile to leave. Didn't fully re-hydrate till Tuesday!).

The Great Langdale Valley is guarded by the dominating Langdale Pikes, and is a walker's and climber's dream come true, and according to the Fell and Rock guide book "contains perhaps the best concentration of south-facing crags in the Lakes".

There is a range of grades and walk-ins to entice all. A thirty minute approach will bring you to Scout or White Ghyll Crags. However, the promise of blue skies and classics routes will surely draw you higher to Pavey Ark and Gimmer, to give a fine mountain day.

For those wishing to walk / scramble there are excellent possibilities; how about the Langdale Pikes via Pavey Ark and Jack's Rake. Still plenty of energy then continue on to Bowfell, Crinkle crags and (legs permitting) Pike O'Blisco. This round will allow you to fully appreciate a pint at the Old Dungeon Ghyll.

All this and accommodation at the coveted FRCC Raw Head Hut, Raw Head, Great Langdale, for £4.00 per night, grid ref: NY304067, surely an opportunity which is too good to miss this summer. 12 places have been reserved; 8 Male and 4 Female. Only a few left. To secure a place, please contact me via E-Mail, at home, or on my mobile. 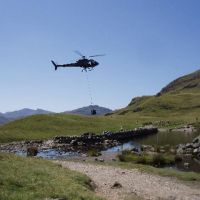 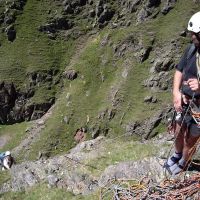 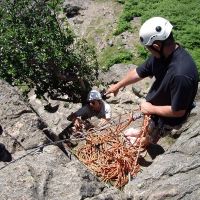 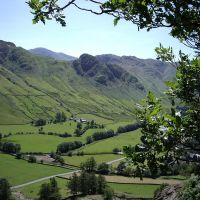 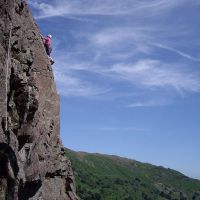 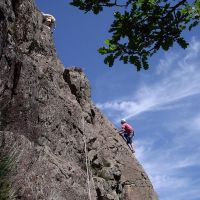 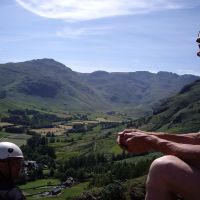 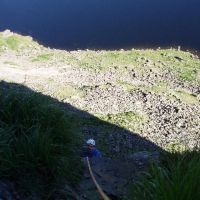 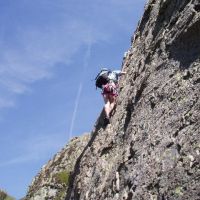 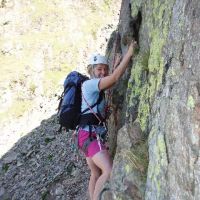 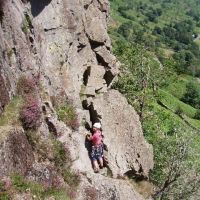