Present in spirit: Nicoletta Bobola had planned to come but for complicated reasons ended up spending a pleasant day on Kinder instead – sorry you didn’t make it!

The group (with the exception of Frank and Margaret who joined us later for the Black Hameldon section of the walk) met up at Quarry Car Park lay-by on Crown Point Road a few miles to the south-east of Burnley. Everyone had remembered to put their clocks forward an hour for the start of British Summer Time! The weather was a little overcast to start with, but turned quite sunny if a little hazy later in the day.

From the car park we followed the off-road path to the Crown Point viewpoint and then on to the Singing Ringing Tree. This musical sculpture, made up of sections of metal pipe designed to resonate in the wind and set up overlooking Burnley in 2006 (one of several Panopticons in the Pennine Lancashire area), was examined with interest although the wind wasn’t strong enough on the day to produce much of a sound. Various people tested the structure’s climbing possibilities and Mark managed to outshine everyone else by topping out (and getting back down again which was possibly trickier!).

Curiosity satisfied, we dropped down over fields and across the A671 to the valley below, joining the Burnley Way alongside the railway for a short distance before passing through a tunnel underneath the line and then crossing the A646 to reach the village of Holme Chapel. After a short distance up the Pennine Bridleway we stopped for elevenses by a handy stone bench and picnic table (not large enough for everyone though).

We continued along the Pennine Bridleway to Cant Clough Reservoir, passing over the dam and following the path on the far side and up over some tussocky stretches to Hare Stones, where we stopped for lunch just before 1 o’clock. Here we were joined by Frank and Margaret who had opted for a shorter variation of the walk starting from Hurstwood Reservoir. After lunch we all continued southwards along the Black Hameldon ridge marking the Lancashire/Yorkshire border to the summit (and trig point) at Hoof Stones Height, where we paused for another short break. We then dropped down Stiperden Slack to Stiperden Bar House (not a pub), following the road for a little way and skirting Coal Clough Wind Farm. Frank and Margaret turned off around here to return to Hurstwood Reservoir via the Long Causeway and Burnley Way while the main group followed the Burnley Way in the opposite direction to descend Pudsey Clough, past a disused gritstone quarry and water-carved pools in the stream bed below, to the valley bottom and the village of Portsmouth.

After crossing the A646 at Portsmouth, the Burnley Way led us up again steeply at first to the final few miles along the ridge over Heald Moor, Thieveley Pike and Deerplay Moor, and back to the car park.

This is a walk over moorlands near Burnley, mostly keeping just within Lancashire but following the Yorkshire border along one section. The walk, much of it along the Burnley Way, takes in Black Hameldon, Thieveley Pike and some intriguing aural sculpture.

Start point: Quarry Car Park (lay-by) on Crown Point Road at grid reference SD 852278 a few miles to the south east of Burnley. If travelling along the A671 from Bacup to Burnley, turn left on the B6238 signposted to Rawtenstall but after 10 yards turn right onto Crown Point Road; the lay-by is a couple of hundred yards along the road on the right. (More parking is available at Crown Point itself about 0.75 mile further along the road, but this has only a dozen spaces and serves the viewpoint, Tree Panopticon and memorial tree plantation so is likely to be busy on a Sunday).

Distance: 13-14 miles depending on route taken. Bring a headtorch just in case.

Route: From the lay-by, an off-road path leads to the Crown Point viewpoint and then on to the Singing Ringing Tree musical sculpture (Tree Panopticon) overlooking Burnley. It then drops down to the valley below, crossing the A671 and then the A646 (various paths possible) to reach Holme Chapel (pub stop if desired, though possibly a bit early in the day).

The route then ascends the Pennine Bridleway to Cant Clough Reservoir and continues along the path up to Hare Stones. From here it climbs the Black Hameldon ridge heading more or less due south (coincidentally along the Lancashire/Yorkshire border) up to the summit at Hoof Stones Height and then drops back down to the valley below, joining the Burnley Way to re-cross the A646 at Portsmouth. (In case of bad weather the walk can be shortened significantly on this stage by following any of several lower-level variations avoiding Cant Clough Reservoir and Black Hameldon).

From Portsmouth, the final stretch continues along the Burnley Way, climbing again to follow the ridge over Heald Moor, Thieveley Pike and Deerplay Moor back to the car park. 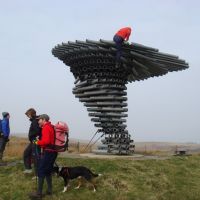 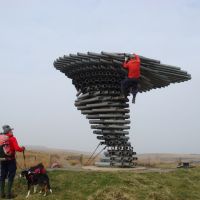 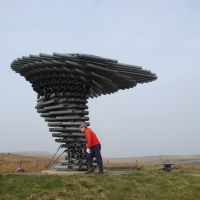 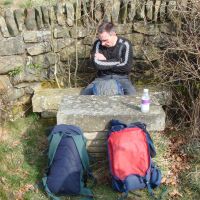 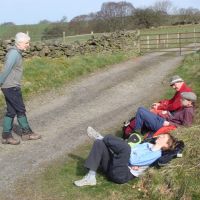 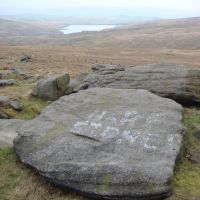 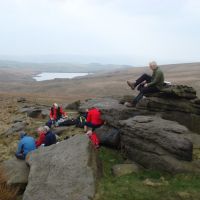 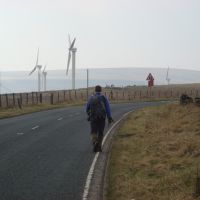 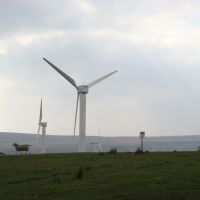 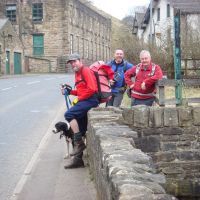