The meet was organised essentially as filler and at relatively short notice. There were two objectives - one to have a “home fixture” back in the Manchester area while there was an “away fixture” going on at the CIC hut.  The second was to have a meet accessible by public transport from the centre of Manchester, as Andy had representation from people who did not have cars.

So Chinley with its railway station was chosen as a start point.  As it happened one person travelled to the venue by public transport and one person partially so.

But a good crowd assembled at the start and we set off a little later than half nine.  It was one degree above freezing, overcast but dry – threatening a little light snow.  The frozen ground meant that we had good going throughout and no mud.

Crossing the railway via the footbridge just to the west of the railway station we then headed up onto Cracken Edge.  I had intended to follow the eastern edge, but after a short while I noticed the letters “K.M.C” written in a patch of snow.  Spooky – I thought – a message or a warning?  But it did cause me to the scan the horizon.  I spotted a well known red coated figure – no not Santa – but Iain McCallum. An affirmative message was received to my attempt at semaphore using trekking poles – and we took a slight deviation to join him and then followed the track via the new allotments to cross the A6015 at Birch Vale.

The Pennine Way was followed to Lantern Pike, where a brew stop was held in a small hole, known to Iain.  Good views were had all around from the “pike”.

Crossing the Monks Road near The Grouse pub, we chose to skirt round Middle Moor rather than head over Mill Hill.  Lunch was had in another recess on the way round. to the white shooting cabin.

Down to Bowden Bridge for a comfort break.  We picked up the Pennine Bridleway again to then head up a very chilly Mount Famine.  All we then had to do was to drop down to Chinley by various footpaths – which we reached around four o’clock.

This meet is accessible by public transport - the start is at Chinley railway station - where there is also ample parking.

In addition to this I will be picking up someone up from Stockport railway station and will have room in the car for another three people. Contact me direct for arrangements.

The route will head north over Chinley Churn via Craken Edge to drop down and cross the A6015 at Birch Vale. Picking up the Pennine Bridleway over Lantern Pike with a view to joining the Monks Road near the Grouse.

From here we can make a choice based on which train people want to go back on. Either to go over Mill Hill and down William Cough. Or to cut round Middle Moor. Either way we end up at the white shooting cabin on Middle Moor.

Here we descend to Hayfield to pick up the Pennine Bridleway south but passing over both Mount Famine and South Head before heading back to Chinley via Beet Farm and Hull End. 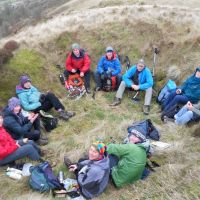