Guests present: Danny Mills, Ian Bell and blast from the past, Liam Brady.

Amazingly the day dawned dry but the slate grey sky was a portent of what was to come. Despite the omens though a good number of people were obviously tempted out by the offer of soup. Either that or they still needed to burn off a few more mince pies after the festive season; Jim.

Fashionably late, we set off as a pack but Michelle soon decided to be the fox and led us a merry chase around the back of Townsend Fold out to Sandy Beds Lane. Occasionally someone had to catch her up to point her in the right direction. As we pulled up onto the tops Jim and Liam were shoulder-to-shoulder jostling each other all the way. Some things never change!

Once near Cowpe Lowe, Vicky led Roy (the only one mad enough to be wearing shorts) and Kate back off the hill via Whinberry Naze to give them a 5 mile-ish circuit. The rest of us then dropped down to the reservoir below Waugh’s Well and flogged up to the windswept cross on Whittle Pike where we regrouped. From then on the going underfoot was distinctly soft as we headed over to Top of Leach via some of Lancashire’s finest bogs.

It was on this stretch that Craig did the best splat down that I witnessed all day and, as always with Craig, the air turned blue! Liam then managed to leave a shoe in a particularly viscous bit of swamp but was relieved that Jim was too far back to take the p***. From Top of Leach we took a low contouring path below Cragg Quarry out to Cowpe Lowe where we regrouped again as the wind really began to pick up. As we headed down the steep northern slopes all hell broke loose as rain of biblical proportions lashed horizontally into our faces, spicing up the descent. A few folk ended up on their backsides and Jim tried to run through a stile, but everyone made it off the hill safe but sodden.

Thanks to everybody who turned up, to Mum for baking the cake and to Mark for organising the collection towards the food, or as it was Climbers Against Cancer Charity, to whom we donated the £30 raised.

Meet up at 10.30am for an 11am start from 120 Hardman Avenue, Rossendale, BB4 6BW. The route will set out through our back garden gate and no doubt involve going over Cowpe Lowe at some stage as well as a few other bits of saturated moorland. Vicky is planning on doing about 6 miles and I will do a longer (10-12 miles) route if anyone is keen. Bread, soup and brews afterwards so  if you could let us know if you plan to attend that would help with the catering

Cheers from Duncan and Vicky 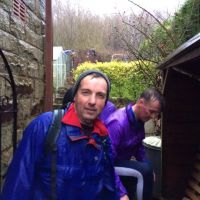 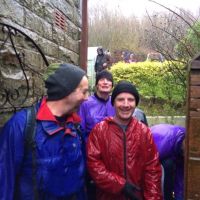 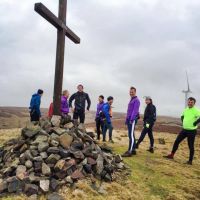 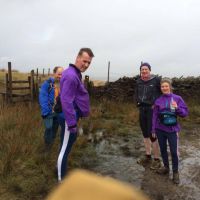