The original meet had been Peak Limestone, but a last minute change of plan and leader – in fact I’m not sure whether we ended up with anything as organised as a leader - meant that we headed to Birchens.

There were two main climbing teams, Nils and Geri, and Gowry and Gary. There was much potential for confusion caused by 3 people having similar sounding names beginning with “G”, and indeed, confusion arose at various points through the day.  Roger seconded or thirded various routes at various times, and I mostly ran around with a camera and a load of abseiling gear.

Gowry warmed up on Trafalgar Crack (VD 4a), Gary led Stokers Break (VD 4a), then Gowry decided to have a go at Topsail (VS 4c). She easily got up to the roof, took a few goes to work it out, seemed completely unfazed by taking a short fall, and got it next go, for her first VS lead. Next was Tar’s Wall (VD 4a) where Gary fancied a rest so I seconded, and finally Tar’s Arete (VD 4a) where both Gary and I fancied a rest, so Roger seconded.

Weather was superb, lovely and sunny all day, not too hot, and a bit of a breeze kept any midges away. Ended up with a nice pint in the beer garden at the Bridge Inn, where I was foolish enough to ask “who’s writing the meet report?” and was promptly voted into the job by an overwhelming majority. 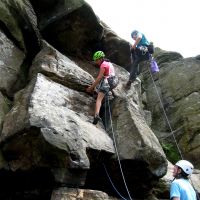 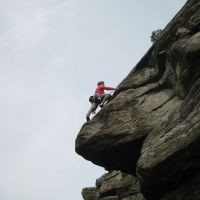 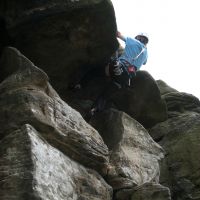 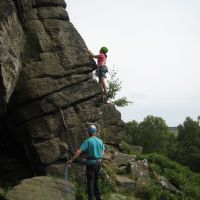