Special mentions must go to:-

Dan O’Brien, for telling me very firmly in 2018 that Wharncliffe was where the Classic Gritstone meet was to be in 2019 (not my choice at all).

Colin Maddison, freshly returned from the Dollies and still smarting from the French speed trap that clocked him at 99mph in an 80mph zone, who cycled out, right up to the crag, from home.    Hope you didn’t exceed 70 on the M67 Colin.

As always there, parking was no problem and the walk-in thro the tunnels and woods was very pleasant.  Most of us hit the crag at 11.00 as planned!

Paul led Beta Crack S 4a, followed by Dan: then Clay led it followed by Hanna and Nils. It’s a nice route.

Dan led Great Buttress itself, VS 4c, and was followed by Paul. This inspired Dave to lead the adjacent Romulus VD:  followed by James.

Overhanging Crack S 4b (or VD, depending on which guide you use…) was the next target for Paul, and Dan collected his gear.

Colin borrowed the meet leader’s gear and shot up the popular Beta Crack to give Virginia her first rock route from a year or more – she whipped up it with no problem.

After much debate about the grade (is it Mod or Diff? – choose your book) James demonstrated Alpha Crack is a piece of cake anyway, and following him Dave had little gear to collect.

Colin decided Virginia needed something harder and took her up Remus S 4a.

Meanwhile, Nils, Clay and Hanna went up the three-star Tower Face HS 4b – one of grit’s Top 50 routes.    By way of encore, the trio then assaulted Hell Gate Crack, HS 4b but only two star.

Back at Base Camp, Nils took Hanna and Clay up Remus – that route must be getting worn out…

Just out of sight of base camp Black Slab took a hammering.   Dave took James and Midge up B S Centre VD, the only one of the trio he had not led previously:   James led BS Left HVD 4a, and even persuaded the meet leader to be 4th on the rope.  Meet leader claimed old age, and actually went up a route that appeared to include most of the face.   Then for completeness James led B S Right, a Mod to which he made a spectacular start:  where was the cameraman?

Midge talked John into rigging a toprope for her on Alpha, then persuaded Paul to put his rockboots back on and take her up Romulus.  Some people have too much energy…..

4.00pm, we (except for Colin of course) headed back to the cars after a fun day – during which we only saw two other climbers at the crag.

Dan, that was a really good nomination.

Right guys - it's Wharncliffe, the crag of our grandfathers.  Why?  Because it has twice as many Mod to Severe routes as Froggatt, it enjoys better weather than Stanage, and it has a pleasant gentle walk-in.  Altogether a gentleman's {gentlewoman's} crag.

The crag is at SK297977.  Approach from the A616 Stocksbridge Bypass, taking the turn for Deepcar.

First left on entering the town is Station Road.

400m down here is a very steep left turn.   You can park here on the left, or in Station Road itself.

Follow the track uphill under two tunnels and across a cycle track.

Continue to a large pool - probably very large after all this rain - and turn right. The path rises, emerging from the trees above the first buttress.

Or you can turn R along the cycle track to a pylon where a steep track leads up boulders to join the usual track.

I'll be there about 11.00, and the sun should be on the crag soon after noon.

A long-standing Member will enjoy telling everyone how 4 years ago I fell off Remus so spectacularly that I dragged him off his belay ledge.  What's surprising about that?    I was seconding it, that's what.  Now I'm older I shall climb with more decorum. 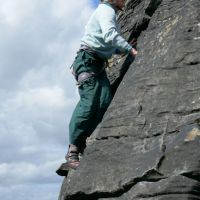